skip to main | skip to sidebar

Tarsnakes motorcycle touring has moved to:


See you there!
Posted by Tarsnakes Down Under at 8:28 am No comments:

Back in 2004 Andy devised a weekend route that was suitable for some old, old motorcycles. It came to be named the Oomoo Run, after a new release red wine that we (over) imbibed in with dinner that night. The Oomoo run was repeated again in 2005 & 2006.

Today I rode the first part of that route as we had yet another magnificent winter's day. I procrastinated (which is quite acceptable for a 'West Coast Procrastinators' old boy) whether to go a little further inland, which I then commenced to do - only to bail out after riding a section of around 5 kms of gravel road works with no end in sight. You will see from some of the pics that Spring is just around the corner here.

Firstly I headed from Geelong to Ballarat - a pretty boring road. Then skirted around Ballarat and headed through some tiny townships like Ross Creek, Snake Valley and Cargnham. From the mullock heaps it's obvious that these were once thriving gold mining towns back in the late 1800's, now there's virtually nothing there.

The shot below is a redux of a pic taken in the same spot 7 years ago, then featuring  my CBR600 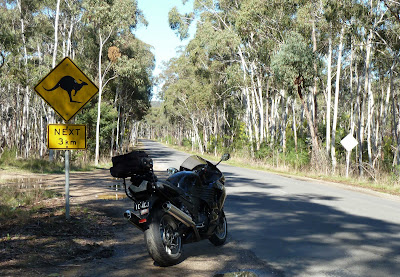 There were some places that I wanted to stop and take some pics, like the dead fox hanging from a road sign and the tiny, sad war memorial in Snake Valley,  however, I wasn't game enough to pull off the asphalt as the the roadsides were very soft and boggy due to all the recent heavy rain.

Beaufort is a small town on the Western Highway that most folk drive through on the way to Adelaide, the Grampians, or the vineyards further on down the road, however, it really is an attractive, well maintained little place. 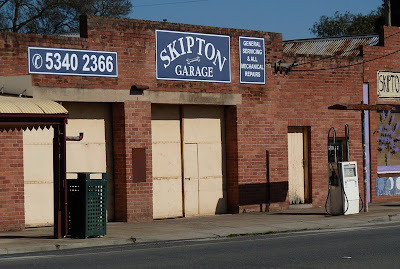 I headed down Colac way as well, then home to Geelong. All up, 396 kms for the day and home by 3 pm.

Posted by Tarsnakes Down Under at 6:34 pm 4 comments:

I'd been hoping for a ride this weekend. Saturday turned out to be as forecast - rain and clearing showers. Sunday was forecast to be cloudy with an unlikely temp of 18C. So I couldn't believe my eyes Sunday morning when I awoke to glorious sunshine with barely a cloud in sight. It was too good not to ride so I  took a short run in what turned out to be beautiful weather conditions considering that it's winter here. My route was Geelong to Forrest, then Beech Forest via Turton's (treacherous) Track, Gellibrand, then I skirted around Colac and headed home. It was around 6C when I left at 9.30am and an incredible 20C when I got home in the early afternoon. 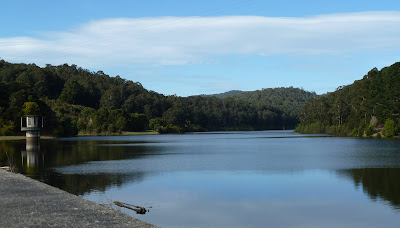 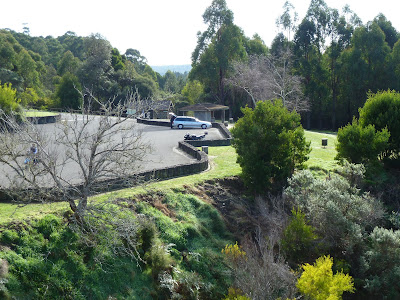 I stopped at Gellibrand for a drink and talked to some fellas who'd been mountain bike riding along the Old Beechy rail trail and were absolutely coated in mud.

After a short break at 'Gelli'  I headed straight home as I had chores awaiting me. All in all, an unexpected and enjoyable day of riding in unseasonably balmy conditions.
Posted by Tarsnakes Down Under at 6:58 pm 6 comments:

mcnews.com.au and Fox Sports are carrying the story of the death of Ken Wootton in his sleep at the age of 57 last Sunday whilst holidaying in Czechoslovakia .

Ride on Ken Wootton.
Posted by Tarsnakes Down Under at 11:12 pm No comments:

Will the novelty of a new motorcycle to ride wear off? I guess so, but not enough yet to stop me riding in some cold winter weather! 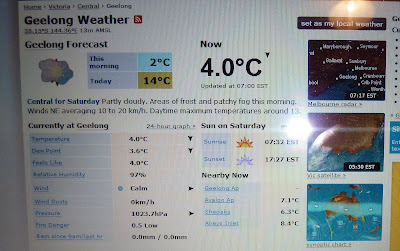 I took a run from Geelong to Colac, then Ballarat then home to Geelong. Temps ranged from 4C when I left to 9.9C when I got home. The connecting theme for today was old mates and their restoration projects. 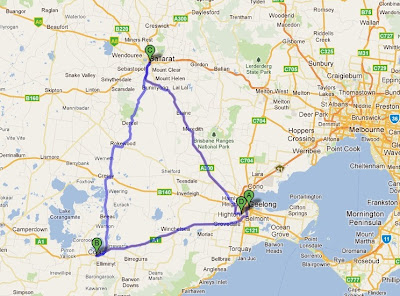 First project was Steve's Norton Dominator (his road ride is a black Commando). 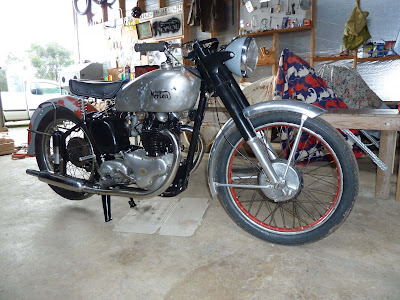 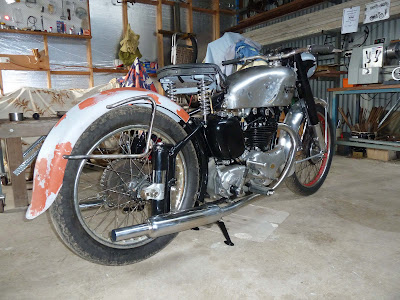 Hours of work on the lathe goes into fabricating lots of new parts on a job like this.

Next project saw me take a quick trip on deserted winter roads from Steve's to Andy's place in Ballarat (a place not known for warmth!) to see Andy's recently purchased T250R Suzuki Hustler and the beginning of what he calls a 'birthday' for his Commando Fastback - new isolastics, a belt primary drive, lots of stainless nuts & bolts and a whole lot more. 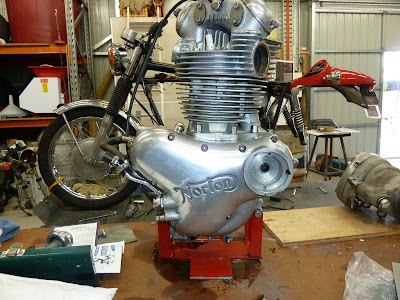 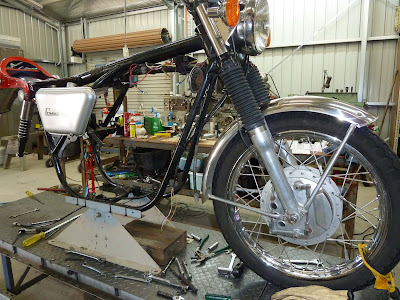 Andy bought a Hustler as his first legal road bike not long after I first met him around 40 years ago. It did everything from get him to work in Melbourne everyday to riding the GOR on the weekends. You wouldn't think that you could carry a box with a dozen long neck bottles of  beer on a tank that small would you? 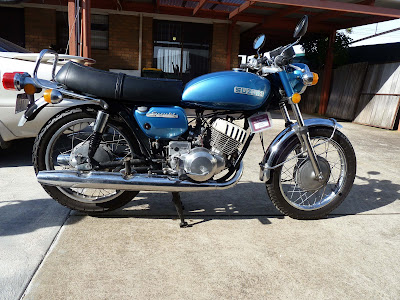 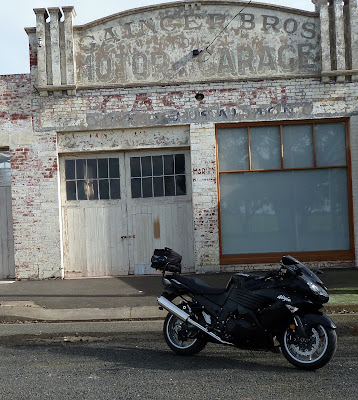 Less happy are places like this. A once bustling center of motor vehicle and British motor cycle repairs and service, in a town that barely exists now. 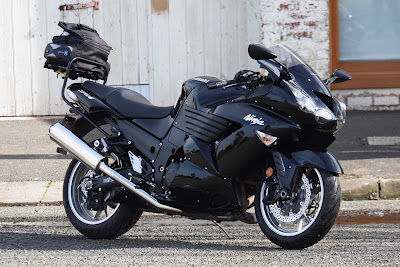 Posted by Tarsnakes Down Under at 4:22 pm 3 comments:

Marty & I took a run to the 12 Apostles today. It was 6C when we left after an overnight low of 0C. It probably didn't get an warmer than 13C anywhere on our route, but we were dressed for the cold and had an enjoyable day's riding.

I only took a couple of shots of the motorcycles parked in Port Campbell as I have dozens of pics of the 12 Apostles area in the camera already! 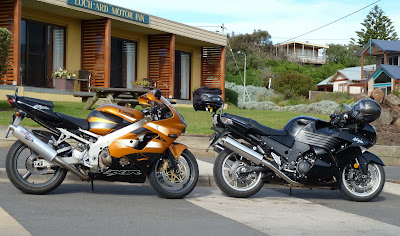 It was my first time out with the new mufflers on the ZX14 and they sound great, without being too loud.
The roads were mostly dry but there is an enormous amount of water lying about the roadsides and in the paddocks.

We wound up doing 341 kms for the day which is good for a day trip in the middle of winter here.
Posted by Tarsnakes Down Under at 4:32 pm 2 comments:

I recently took a run down to Megacycle engineering in the Melbourne suburb of Keysborough to get a set of slip on mufflers fitted. These are built from scratch by the owner Ken Onus and he likes to have the bike there and fit them virtually as he builds them. Megacycle engineering is an old school engineering works, that builds specialty motorcycle exhaust systems. It's winter Down Under and it was a cold 6C when I left home and was  raining for much of the run down there. Ken wanted me there by 7.30am, which meant a 5.30am ish start for me if I wanted to avoid the Westgate Bridge bottleneck. As it was I got there at 7.00am.
Pic below shows a bleak morning. 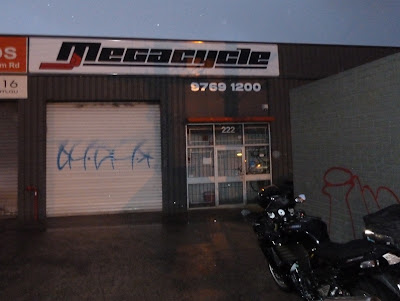 Here is the finished product in stainless steel. The bike's EFI can adjust OK and there is no need for a Power Commander or suchlike to get it running OK. 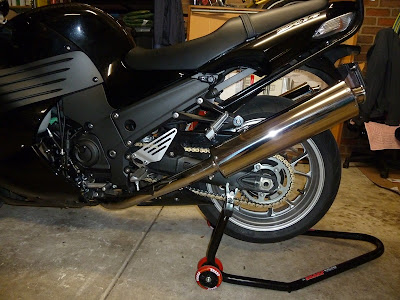 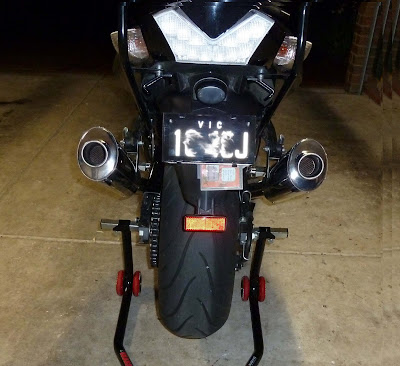 And the sound - a lovely burble that's not too loud or intrusive. Also the oval shaped pipes look much less bulky than the big round standard pipes.

Ken is the only person I've ever met in Oz who has raced at the IOM - with some success actually.
Ken Onus IOM

Pics
Posted by Tarsnakes Down Under at 5:43 pm 3 comments:

I have a new blog at
http://tarsnakes.com.au

It is still a work in progress, however, the past posts from this site are all there.

Tarsnakes Down Under
Motorcycle travel.